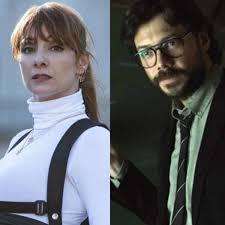 What’s going to happen to the Professor now that he has been caught red-handed? People have been saying that Alicia is probably Berlin’s wife, who has come to take revenge on the Professor. Hmm!
Now, this is what I think. Alicia is screwed, left, right, and center. Either way, if she hands over the Professor to the police or not, she will still be in prison for the rest of her life. I mean, after she screwed over Tamayo, she knew damn well that she was in for some kickass music. Probably death metal kind of music, no? But in the end, she does figure where the Professor is and comes face to face with him. What happens next?
What I think will happen next is that the Professor will get her to join him and his gang. I don’t see another go. He will offer her a considerable sum of money, he can hide her and keep her protected for life – if she adheres to the dos and donts, and she will be able to bring up her child the way she wants. If she doesn’t join him and his gang, then she is again doomed, because it’s not like the Professor will allow her to catch him and send him to the cops, right? I mean, he’s well-versed with all sorts of fights (I am presuming). Plus, she knows the ins and outs of the Force. Right? It will be a great idea to join the Professor if she wants to have a secure future.